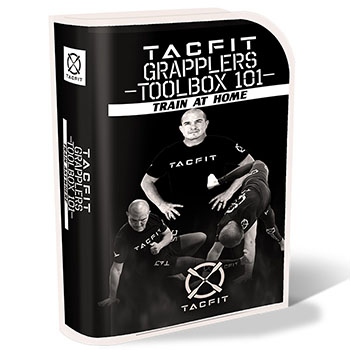 What is Grappler’s Toolbox 101?

“I made the mistakes. I wish I would have known about this type of training when I was younger. Luckily I met Scott Sonnon and have it now and can share it with you so you don’t have to make the same mistakes and can be your best in training and in life!”
– Alberto Crane

The original Grappler’s Toolbox created by TACFIT Founder Scott Sonnon was voted the Best Martial Arts Video of the Millennium in 2000 by the International Martial Arts Hall of Fame. This program is a training course developed for grapplers but with applications for everyone. Come train with Brazilian Jiu-Jitsu World Champion Professor Alberto Crane and learn the tools and exercises that he uses every day to help him sustain peak performance even after years of training and competing at the highest level in martial arts and Brazilian Jiu-Jitsu.

These drills may appear simple but they are powerful in the way you connect breathing patterns with proper structure of the body with movement. Connecting your breathing with structure is one of the core principles behind TACFIT and learning these methods will help you improve performance and build foundational strength.

I first met our Founder and Creator of TACFIT®, Scott Sonnon, when he was contracted to be my strength and conditioning coach for one my UFC fights. I had suffered a bad neck injury after being thrown on my head. Coach Sonnon showed me a series of movements and showed me how I could heal myself through movement. It was an experience that blew my mind; one I would never forget.
Since that day, I became fascinated with TACFIT®. Years later, I had the opportunity to attend a TACFIT® Certification and felt like I got a second chance at life, to really live my best life in every aspect. I sought out and went to every TACFIT® workshop, seminar and certification around the world. I became a TACFIT® Team Leader and eventually became involved in TACFIT® as its CEO. I believe in the work of Coach Sonnon because it has changed my life and the lives of millions of people, and I know it will change your life, too.

Your Benefits from Grappler’s Toolbox 101

“With all the injuries I previously sustained from my Jiu-Jitsu and fighting career and with my eventual MS diagnosis, the physical tests of strength and mobility required to become TACFIT certified should have been impossible. I look at TACFIT as a martial art, where the opponent is yourself. Keeping your technique under stress is how you win or lose.

Here’s how I’ve created this introductory Grappler’s Toolbox to create your greater benefit:

“These Flows are Amazing!
I usually just train and train hard, never thought about recovery exercises. It has helped my knees, hips and joints. I have also become more flexible and able to move smoothly. I am very thankful for this!!!”

“Immense Experience from a World-Class Grappler”
“Professor Crane has an immense wealth of experience as a world class grappler and his Grappler’s Toolbox will improve your coordination, flexibility & strength. This series will keep you healthier, safer and more capable for the potential rigors of grappling training. The longer we can train and the more capable we are in practice, the more capable we can be for class, competition and life!”

“We Trained Hard But We Never Recovered”
I have been friends with Alberto since the 1990s when he moved down to Brazil. We trained hard every day and competed a lot! We never thought about recovery in those days. It finally caught up with me and I had to stop training because every time I did, I had a hard time walking because of my lower back.

Until Alberto came to visit me many years later and started to show me these different movements, flows, and Scott Sonnon’s work. I began to train in the TACFIT System and began to change my life! Not only was I able to train again almost every day but I was able to compete again after 15 years! I can’t recommend the Grapplers Toolbox 101 enough! It will help you with everything on the mat and so much more!”

There is NO RISK for you. Try it for 30 days and if you are not satisfied we’ll refund you, no questions asked.