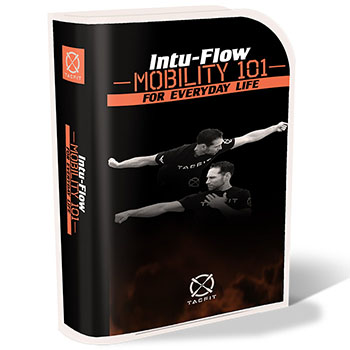 What is TACFIT Intu-Flow Mobility 101?

Easy to Learn, Just Minutes a Day to Restored Mobility

Does your neck hurt? Do you feel a pinch on your bicep because your arm is constantly curled from holding or talking on your phone? How about that sharp pain on your right shoulder that feels like you have a clamp on it? Where is the primary focus of your pain? Is it on your neck, lower back or hips?

As you sit more and move less, your pain increases.

IntuFlow Mobility 101 gets you moving again!

Wherever you are in your walk of life, you can begin to rejuvenate the natural ability of your body to move freely, just as you did as a child. And it happens one day at a time, one step at a time, starting today.

Years ago, I sustained a neck injury after wrestling with a friend of mine at a party. I felt my neck pop, and the next day I was kind of sore, but then it kept getting worse. About two months later, I couldn’t turn my neck, left or right. I couldn’t look up anymore. I was unable to sleep through the night because of the excruciating pain.

Then, I discovered the work of TACFIT® creator and founder Scott Sonnon through a roommate. I began studying and practicing his system, Free to Move, with the Intu-flow Longevity System authored by Scott Sonnon. I would read a paragraph, then do an exercise. At that time, I was limited to only doing neck drills because my entire body was in too much pain. But, I did the exercises every day. I kept practicing until eventually, I could complete the full body flow. I healed my neck through movement ONLY, and now I can do a handstand. That’s amazing to me!”

What’s In TACFIT Intu-Flow Mobility 101 For You

TACFIT Founder Scott Sonnon developed Intu-Flow® (Intuitive-Flow Mobility Wellness), a unique system of human movement and neurological education. It’s so innovative that some doctors have called it “the most important self-therapeutic discovery of our age,” distilling yoga, pilates, Yai Chi and QiGong all in one system of pain-free, high-quality living.

Mobility is the elixir of life, a truly innate fountain of wellness. And it starts with just a few minutes of Mobility exercises a day!

Mobility is our body’s own anti-aging agent.

“Joints need lubrication. If you are over 30, your joints cannot be lubricated with synovial fluid unless they are moved. Arthritis is something that can be tamed by movement. I have arthritis in my cervical, thoracic and lumbar spine. It used to be a challenge to get out of bed…even when I was in my 20s. Now, almost forty, I’m moving as well as well as I ever have with the use of Intu-Flow. Doing movements like waves, multi-planar back arches have given me freedom from pain and freedom to move.”

“I admit to having spent a long time beating myself up about my appearance, especially when compared to the images we’re subjected to every day of our lives, i.e. the chiseled bodybuilder look. I FINALLY took Coach Sonnon’s words to heart and decided to stop caring about the aesthetic results, and just concentrate on feeling better. So, I’ve been doing Intu-Flow® anywhere from 3-7 times a week for the past 5 weeks now. That’s all. And not only do I feel about 100 times better than I did, I just stepped on a scale for the first time in about 2 months, and I’m down 10 lbs. And I didn’t even notice.”

Remember the image we began with… the image of your childhood, probably freely moving and playing …and now, the adult, sitting in a chair behind a desk riddled with pain in the neck, shoulders, back and hips?

What would if feel like to be free to move? To actually free yourself and dance, run, kick your legs up on a swing, and even do a handstand? Intu-flow is for everyone. You may be a bodybuilder, Jiu-Jitsu practitioner, dancer, teacher, driver, young, mature, in perfect health or have issues simply because of the strain your neck endures from looking down at your keyboard or phone all day.

There is NO RISK for you. Try it for 30 days and if you are not satisfied we’ll refund you, no questions asked.

Select your currency
USDUnited States (US) dollar
EUR Euro
We use cookies to ensure that we give you the best experience on our website. If you continue to use this site we will assume that you are happy with it.Ok