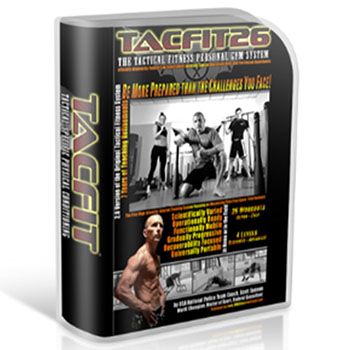 View cart “Tacfit 26” has been added to your cart.

In the past decade, since weʼve been qualifying professionals worldwide and consulting for government standards agencies, we’ve participated in the eruption of a massive grass-roots resurrection of old-school, low-tech, low-cost classics: clubbells, kettlebells, monkey bars, gymnastic rings and straps, sandbags, parallel bars, medicine balls, and the oldest school of them all – human movement often called calisthenics or bodyweight conditioning.

These tried-and-true tools survived, not because theyʼre merely inexpensive, and require NO maintenance, but because they restore our freedom: something we have been reclaiming in many aspects of society. Moving freely and powerfully, we develop true functional fitness through movement, not merely muscles. These methods have been proven on the mat, in the field and on the streets, so we KNOW that they can return back into our homes, where they belong, to you.

Scott Sonnon was forced into a life of seeking alternative exercise options due to early childhood joint disease and motor challenges. Institutionalized for his learning difficulties in a psychiatric hospital, teachers and doctors advised that he set low-bar realistic expectations on his potential. Through tremendous persistence he rose to become an adjunct professor of physical education at Penn State University, a US National Team Coach, and a 5 time international martial arts champion.

No time to exercise? No problem?

You should never need more than one half of an hour. Many days are less than this, and they’re all only 20 minutes of exercise. The rest specifically restores your movement and compensates for any tension you hold in your body.

Don’t think that 20 minutes can make a difference?
Believe this: less is more.

If you’re exercising more than 20 minutes, you’re probably hurting your growth potential! 20 minutes is always just on the outside of what you need.

At the same time, it’s all about variety.
Variety must be meticulously programmed, so TACFIT Founder Scott Sonnon devoted nearly 30 years into developing this system that you now see. And in as many years, we’ve been extremely busy implementing it into federal agencies, military units and martial art gyms in 70 countries.

Too busy or too ache-y to workout every day?
After years of hearing this (and completely understanding this), we’ve provided all of the recovery focused drills, and the fundamental basics necessary for entering exercise safely, for progressing consistently and for eliminating injury.

This is a giant program. There are 26 main programs in TACFIT26, each is named after a letter in the Nato alphabet from Alpha to Zulu. It involves a before and after test, called the “Qual” which represents all of the primary movement patterns necessary for real-life tactical fitness. Not everyone starts at the same level or progresses at the same constant, so there are also four levels to each exercise in those 26 programs. Each level is named after the first four Greek letters: Alpha, for the top performance; Beta, for the toughened pack; Gamma, for the segue to strength conditioning; and Delta, as a gross motor bare minimum to get you started, and to which you often performed even if you run with the Alpha dogs sometimes.

Also, included are very specific micro-warmups and micro-cooldowns, which we call mobility and compensation, respectively.

This sounds like a lot but as we said, the system is massive, like an ocean. But included here are charts which plot your course for you, so that you navigate through YOUR fitness at your rate of recovery, not someone else’s. Follow the charts, complete your journals, and your individualized TACFIT path will appear from the formula.

The most widely adopted tactical fitness system on the planet.

The most successful approach of its kind backed by government tracked hard data and approved to be taught in departments across the country and around the world.

Nothing of its kind existed before this integrated approach to ancient tools, and nothing since has woven in the cutting-edge scientific discoveries which have eliminated injuries while exceeding performance of prior approaches.

TACFIT makes you more “fit and ready” than any other approach. Fact.

There is NO RISK for you! Try it for 30 days and if you’re not satisfied, we’ll refund you 100%, no questions asked!